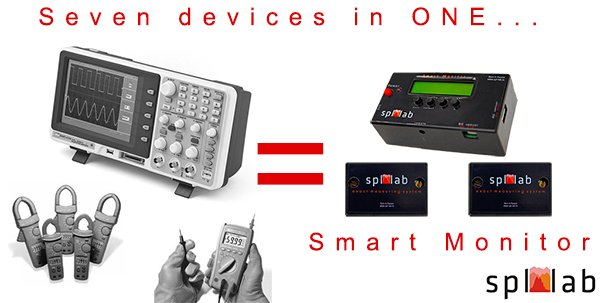 The Spl-Lab company that gained reputation at the market of sound analysis and measurements with its noise meters, AFC meters and devices for sound pressure measurements, decided to step aside from the main direction of its developed production and presented a new multifunctional device for measuring current-voltage characteristics of electric circuits and sound section of a car. The name is this device is Spl-Lab Smart Monitor. It is a multifunctional car multimeter.In this article about the Smart Monitor we will try to help the reader to understand how this device works and where can it be used.

When saying "multifunctional" we mean that Smart Monitor combines functions of several devices:

Seven devices in one. That sounds good. It is real car multimeter! But how the single instrument can combine in itself so many devices? Let`s analyse each function of Smart Monitor and understand where can it be applied. 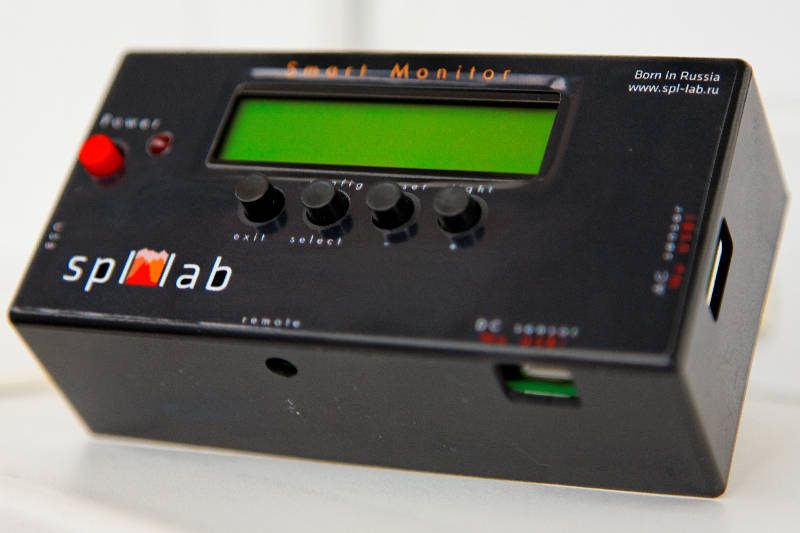 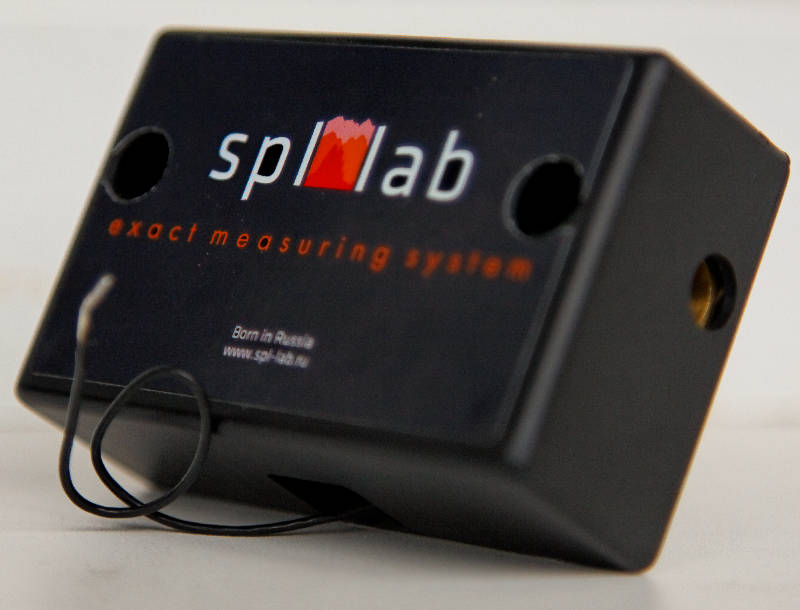 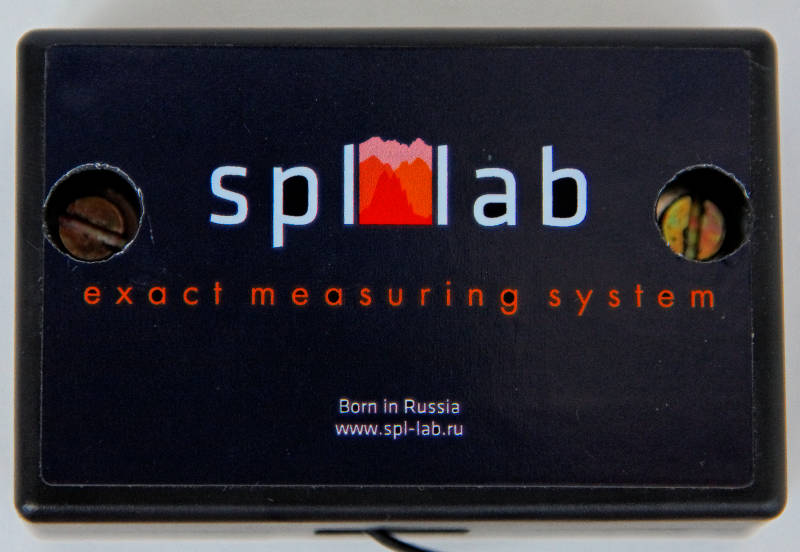 There is nothing interesting in it, you can say. This measuring device can be purchased in any electric tool shop with a little money. On one hand - so it is, but the matter is that non-expensive meters of current-voltage characteristics for electric direct current and voltage circuits (simply voltmeters), can measure limited current (about 20 A in the break in a circuit). In view of the fact that the device supply voltage in a car is only about 12 volt, the consumed current is substantially higher and, often, connecting the device in the break in a circuit leads to high power loss. The Smart Monitor is compared favourably with non-expensive voltmeters, because it allows measuring big current with remote sensors that are connected to the electric circuit of the car. There are two types of direct current and voltage sensors 200 and 600\1200 ampere. The sensor for 200 ampere should be switched in the open of the measured circuit and the second sensor for 600\1200 ampere has non-contact current transducer, that allows to take measurements without braking the electric circuit. It is the first highlight of the Smart Monitor device: possibility of non-contact measuring of a high current. Where can it be used?

These are not all the areas where this function of the Smart Monitor can be used.

Alternating current voltmeter/amperemeter, that works according to True RMS algorithm

And again the question arises, of what is the "speciality", because such device also exists and practically every automobilist has it. And the speciality is hidden exactly in the word combination "True RMS". The thing is that ordinary voltmeters measure according to the algorithm that allows to reliably measure only the sinusoidal shape or approximately sinusoidal shape signals, but when the signal strongly differs from sinusoidal wave, readings of the voltmeter will be nowhere near the actual ones. Also the limit for Smart Monitor is 100 ampere, when for ordinary devices is typical limit of 20 ampere. Smart Monitor measures the direct current and voltage with high accuracy with no regard to the shape of signal, because it works according to TRUE RMS algorithm. In addition the measured current is 100 ampere. Where can it be used?

Again it is not the complete list of application scope. 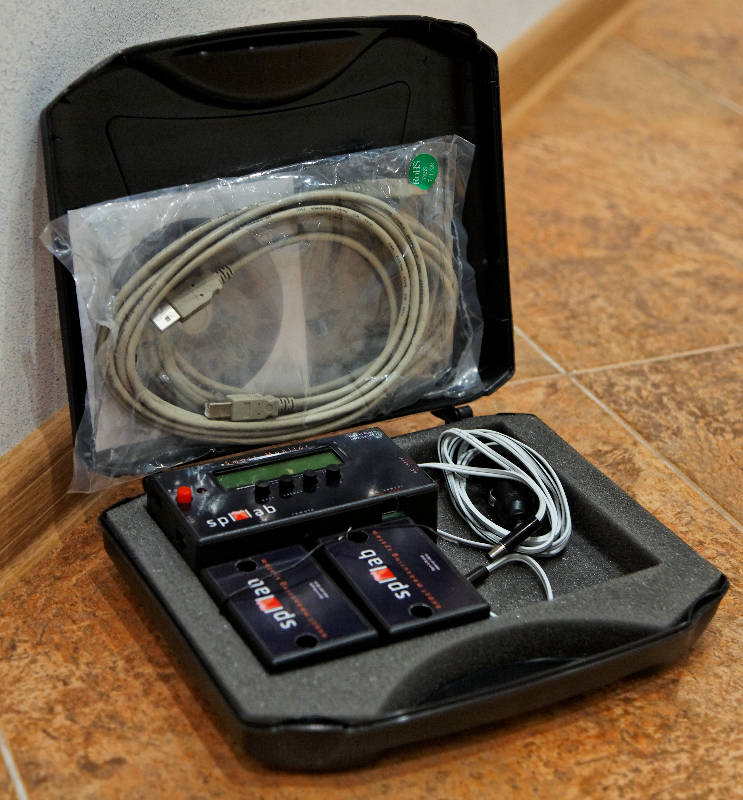 It should be mentioned that that the ready solutions of such kind are rather rare and their price is pretty high. One can measure power only using two devices at the same time: amperemeter and voltmeter, and in addition to all this, the amperemeter not always will allow a non-contact measuring of a high current. The speciality of the Smart Monitor is a possibility of measuring high current (up to 25000 watt) of direct current and voltage circuits, using just one device. Where can it be used?

Here again we will talk about two devices lying on the lap of the automobilist, used for finding power of the AC and AC circuit current and voltage. And the Smart Monitor has everything in the same black box and is using the True RMS algorithm. Smart Monitor measures the power till up to 30 000 watt, according to the True RMS protocol and everything is in one device without many wires. Where can it be used?

Impedance meter of the acoustic systems

There are not so many devices that perform similar measurements and you will not find them in your or in your neighbour's garage. Two ordinary voltmeters can be used for this, but again there is limitation of current and using cheap protocol won't allow you receiving accurate results. Really accurate measurement results of impedance of any acoustic systems from low-capacity to heavy-duty. Where can it be used? 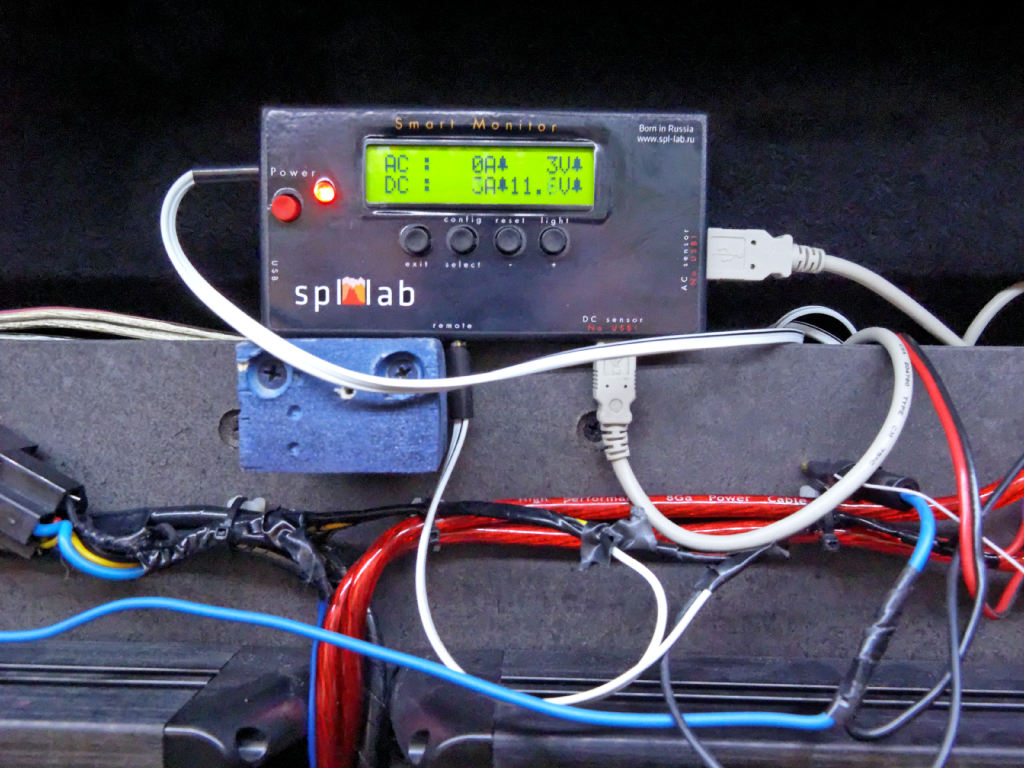 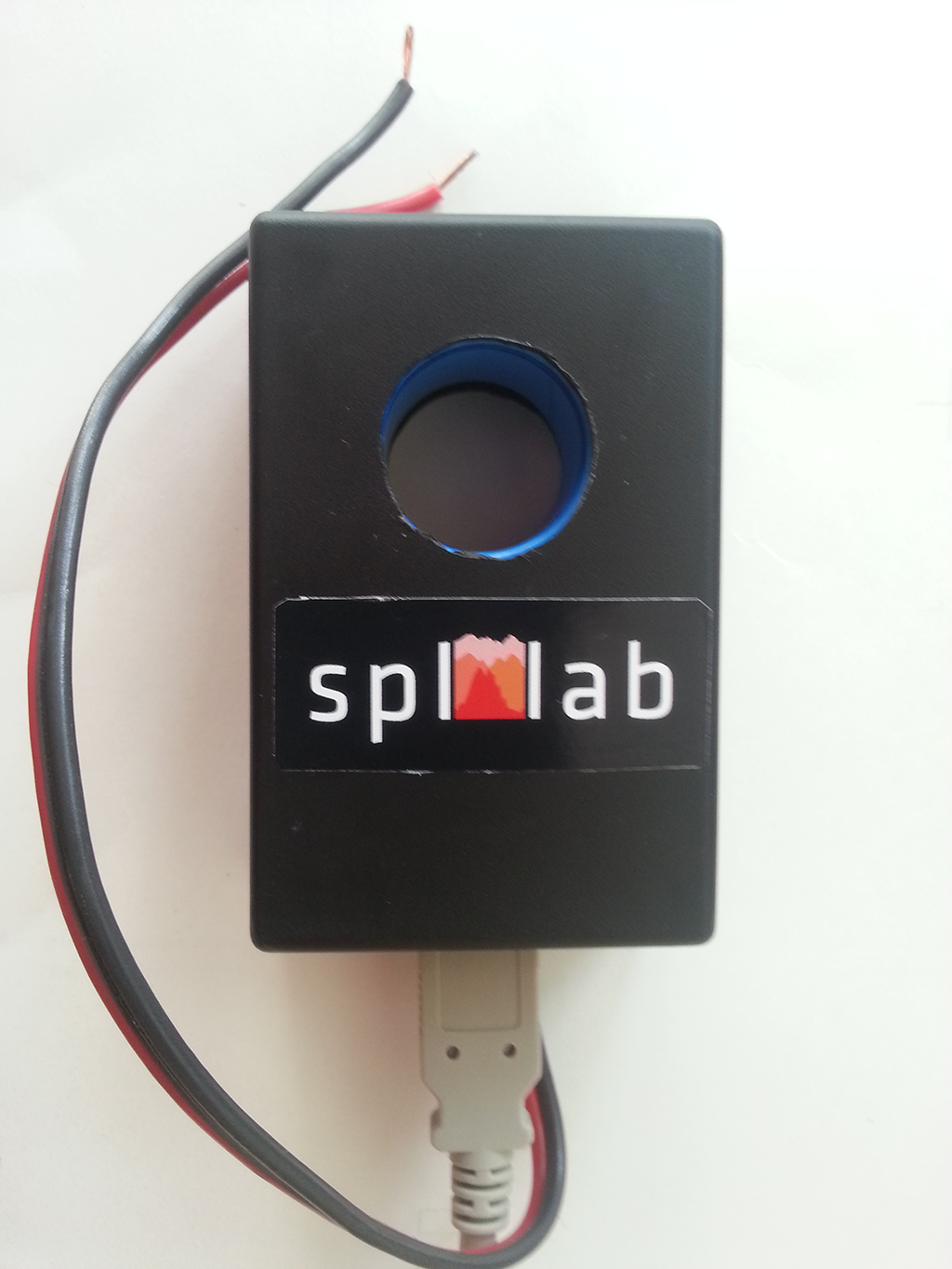 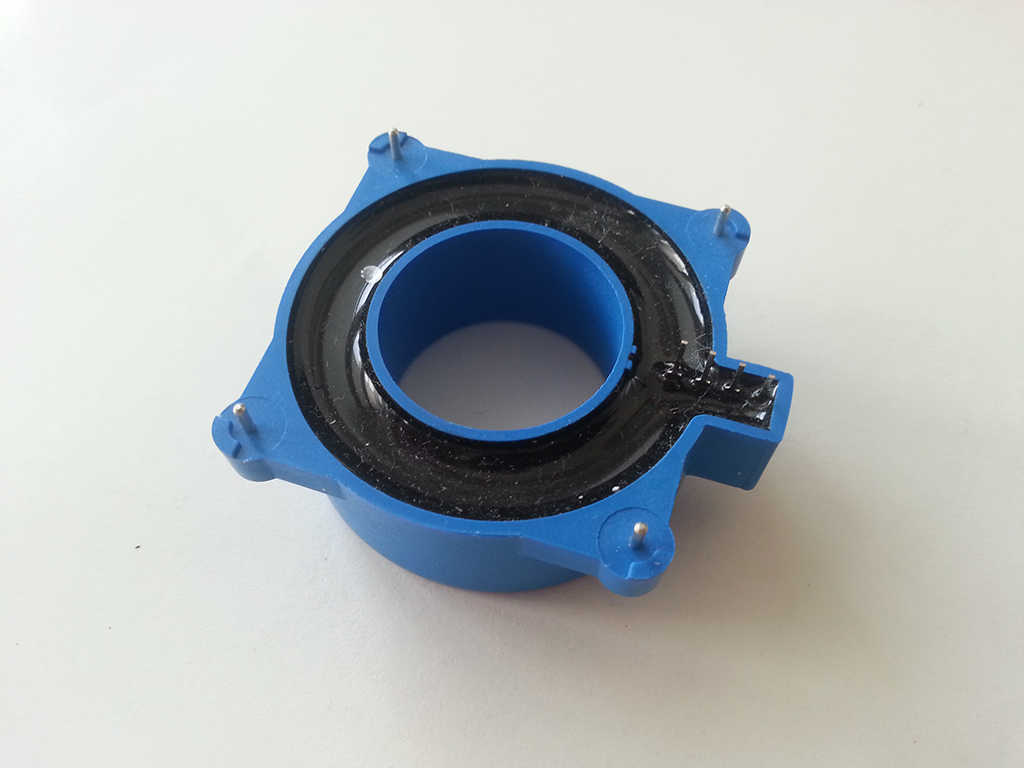 And this is even more interesting. We have familiarized with main impressive features of the Smart Monitor measuring complex. And now imagine, that depending on the range of definite measured values (whether it be current, voltage or power) you can make device break the Remote controlling circuit, thereby protecting any additional equipment of the car. Sounds interesting, is not it? The Smart Monitor has programmable protection feature that practically has no analogues in the entire world. Intellectual replacement for fuse. Where can it be used?

With wide setting option the sphere of application of this feature is wide indeed.

This function can be considered as a nice and useful supplement or some kind of "ribbon on the wrapping" of the Smart Monitor. Because this function actually replaces an oscilloscope. But we should mention that even having a good digital oscilloscope not always you can see the distortion, which will be clearly detected by the Smart Monitor. Easy and visual way of defining distortion. Where can it be used?

In this article we have analysed the resource of the Spl-Lab Smart Monitor car multimeter. We examined each feature of this device and the sphere of its application. Application range of this device is really wide. Will you find what you need in this long list? I think - Yes.

Smart Monitor - there was no such thing before! Seven devices in one. No parallel in the world! It combines…