Our colleagues from testing laboratory Car&Music of the “Tuning Avtomobiley” magazine have tested measuring complex Spl-Lab RTA Meter Pro Edition (USB microphone) for compliance with specifications stated, using the reference hardware-software complex AUDIOMATICA CLIO. Expecting the article in the abovementioned magazine, with the permission of its authors, we decided to boast the received results.

AUDIOMATICA CLIO is a Hardware-software complex which among the producers and developers of Hi-Fi and Hi-End audio industry is considered to be a model example. AUDIOMATICA products since long ago have shown themselves to good advantage as measuring equipment for testing consumer electronics at the production lines, as well as in the mass-media testing laboratories. AUDIOMATICA CLIO is also used by many producers of acoustic systems (Monitor Audio, Cabasse, KEF) for final inspection of ready product. The price of complex from the producer is about EUR 3000. In short, reliability of this device readings is also practically assured.

Our company, as a producer of tested equipment, followed the process of works with high interest and slight excitement and nervousness.
Specially for conducting the benchmark testing of Spl-Lab USB RTA Meter (Pro Edition) microphone employees of testing laboratory Car&Music of the “Tuning Avtomobiley” magazine constructed closed acoustic chamber for getting the representative results. Inside the chamber they placed a broadband acoustic system that is able to playback signals of the entire audible frequency spectrum. Both measuring microphones were directed towards the acoustic system and placed relatively close to each other.
Test included playing back through the acoustic system the sweep-tone (20 Hz - 20 KHz) and pink noise (10 Hz - 20 KHz). In both cases the results were very close. When measuring the noise signal for smoothing the curve in Spl-Lab Measuring Center the averaging mode with the value of 100 samples was enabled. In both programs the logarithmic representation of frequency scale was used or 1/6 octave representation.

To our surprise, the results exceeded all our expectations center image(red curve is a result received with AUDIOMATICA CLIO, log. scale). Left and right images - Clio on the upper side of the screen(1/6 octave). Results turned out to be very close.

Spl-Lab company is rather young at the measuring equipment market, but during 7 years of it`s existence it was able to get invaluable experience in developing measuring and sound analysis devices. We were able to use this experience successfully when improving our products. When we see such results of our work we want to continue doing it. 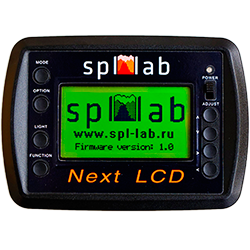