Finally I've decided to adjust the audio system of my car.

During four years I own this car I had made many alterations in my leisure time when I was free from other work. Several times everything was changed: I bought, sold, listened, burned out and repaired. After such hustle the list of custom components was formed:

Don't ask me why exactly this components. It's just "developed historically" this way. Just because some things burned out, some things was too expensive and I had to sell it, for some there were already holes in the upholstery, other things were got at cheaper price etc.

As it is not always enough time for car sound because of high work load, I didn't even adjust the car system, replacing components from my likes or dislikes perspective. And changing the equalizer presets. So, in short the system was set by ear. As the result of all this recombination the following connection pattern came out: From the car stereo via two low-frequency outlets (frontal and subwoofer) using 4 ART Sound wires the signal goes to the trunk, where two amplifiers are fastened to the stealth shelf. Signal from the front outlet of the car stereo is divided into two and using two y-splitters comes to 4 inputs of the Digital Designs C4 amplifier. The signal from subwoofer outlet gets into ART Sound 1000.1. Low-frequency speakers Hertz 165l, that are built into the front doors, are connected to two output channels of DD C4, cutting off frequencies above 3000 Hz (according to text, written next to the control on the amplifier) with an inbuilt filter. Midrange-speakers and tweeters connected in parallel and cutting off all the frequencies below 3000 Hz (according to text, written next to the control on the amplifier). Subwoofer is attached by coils in parallel to the ART Sound 1 Ohm output. Loudspeaker is directed towards the rear number plate, the side of the case is pressed against back sit in such a way that there is some place for staff between the subwoofer and the trunk lid. Crossovers were successfully forgotten in the garage. Finally i got feeling that I can adjust my system by ear and I really enjoyed the result. But as it is said the 'cobbler always wears the worst shoes', I, having at hand a measuring laboratory with whole arsenal of measuring tools, couldn't find time for tuning my own audio system using the specialized equipment. Here is video of measurement of AFC made using SPL-LAB USB RTA METER (Pro Edition) sweep tone 20-20000 Hz, equalizer in FLAT.

How it is now:

To begin with, I had found in the dark corner of my garage the old crossovers from the HERTZ HSK163.3. set. The three way passive crossovers with possibility to adjust (-2_0_+2). It was decided to switch the midrange speakers and mid-bass to crossovers and leave twitters on the separate channels of the amplifier. Why this way? As the practice has shown, the difference of sound sensation level (gain) on the amplifier varies two times; it is for achieving acceptable sound I had to turn out full gain for mid-bass and half this much for high- and mid-frequencies. the value of attenuator on the crossovers *** of the midrange was +2 dB as the midrange speakers were built into the door covering without additional damping and gave faint sound. I'd say that I wasn't mistaken in my calculations. So, I installed crossovers into the corner of car dashboard, adjoined all the wires with a glance to new configuration, closed and isolated everything and put it in its place. The car didn't look like it was dismantled any more, and it delighted the eye..

But still I had main part of all installation to be done. It is tuning!

For measuring AFC and adjusting it I used our new device USB RTA METER(pro edition). By the way, the device had passed numerous laboratory tests at the bench and tests in the off-site audio systems. But I never managed to get with this mike to my own car or home audio system. So it was kind of debut for my car. You've seen the results of measurements of AFC before the modification. And it was terrible, wasn’t it? Now I had to adjust the sensitivity of amplifier channels, the frequency cut-offs for amplifier crossovers and the equalizer of the head unit. I've managed it fast with the subwoofer and mid-bass: subsonic set to 30 Hz for subwoofer, frequencies above 50 cut off by head unit, range is small but further the mid-basses catch up. They are cut off below at 50 Hz, but upper limit is cut at the frequency of 400-500 Hz by passive crossover. AFC measurement confirmed this. Moving to the Midrange-speakers. Here one very interesting fact was discovered. When measuring AFC, I've found out that the passive crossovers do not cut off the midrange channel; it is the midrange-speakers perform to the very top. It was a surprise, because with such connection in the three way system at the high-frequency range there is total mess because of overlapping of mid-frequency and high-frequency. This problem was solved by 'cutting' high/low frequencies by the amplifier. It also turned out that indication next to the adjustment knob barely keep in line with real cutoff of the frequency, for example for cutting the mid-frequency at 2500 I had to place control at 1.5 KHz. Won't guess it at once! Next comes high-frequency, but it is not difficult if you know the AFC of the front end. Using the amplifier I've cut off the frequency below 3000 Hz. But again we see mismatching of writings on the case and the real cutoff of the frequency. For cutting 3 KHz the handle has to be fixed at about 4.5 KHz. It's not hard to burn everything off if to put the cutoff for tweeter at 3 KHz as it is marked on the amplifier in, let’s say, three way system... The device helped in adjusting the subwoofer channel, channels of mid-woofer and midrange-speakers altogether and the tweeter channel. It turned out that the subwoofer level had to be turned on at maximum on the amplifier, but cut off to -2 in the settings of the head unit, because one can always 'turn it out' on the head unit when there is a wish to groove. The gain for the mid-woofer and mid-range channels was turned all the way out and only in this case could keep up with subwoofers. But at the high-range channel the sensitivity had to be turned down for about 50%, otherwise the upper part was going off-scale in the spectrogram. Settings of the head unit equalizer were easy. With its aid I had got rid of unpleasant amplification at 80 Hz placing compensation below this and neighboring frequencies at -2. Here is AFC of the audio system adjusted using the SPL-LAB USB RTA METER microphone.

And here is the frequency response tuned by ears: 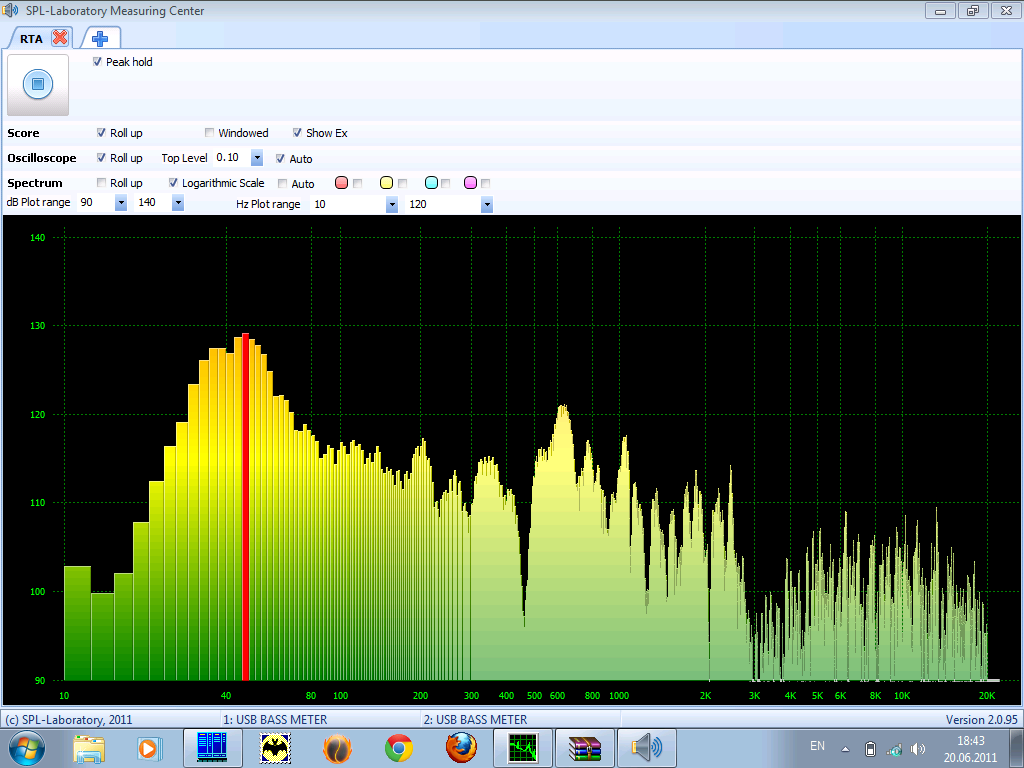 What can be said about the sound? Flat AFC is good when the car is standing still. Everything is on its place and everything sounds good. But once you take off, the noise of the road, in spite of all the noise isolation, begins to choke up the low-frequency range. But it can be solved by changing the head unit equalizer settings at 80 Hz frequency from -2 to -1. Because of proper separation of the components we got read of the jumble in the sound and received detailed sound. I'll drive, listen and adjust the system further. The main conclusion I've drawn - some people may have perfect hearing which can help adjusting anything, but it is not my case, nor the case of the most of the people. But with the aid of device it becomes clear at once. I guess I'll never spend time for adjusting 'by ear'.